No no, I didn’t travel somewhere new or do anything remarkably crazy … but I did TRY something new. Something that would’ve scared me WAY too much, even just a few months ago, to even attempt. 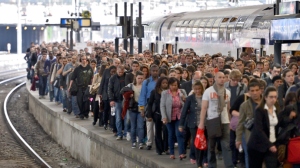 Background: for nearly 1 full week the trains here in France (SNCF: TGV, TER etc.) have been on strike: WHY?, Link, Link, Link. It was so bad at one point (the first day, when taxis were on strike too) that people were walking to the Paris airport CDG!!! Crazy! This also ended up canceling most trains that I would normally take on the weekends to get to Antibes to visit my BF. So, what’s a girl to do…??

Options: Cry…. nope. Wait at the train station all day in an attempt to GUESS which trains will actually leave, but not only leave, actually arrive at their destination in a decent amount of time (yes. some trains left the stations and didn’t arrive to their destinations until 12 hours later since Strikers were blocking the lines…). Yeah, way too much stress for me!

The drive to Antibes is about 2 hours from Marseille. In light traffic that’s WAY faster than the train. Convenient too, if you are near the departure point and your driver wants to drop you near your destination. The great part is, this is all stuff you can discuss before reserving your spot. So. When you decide where you wanna go, you pick your departure city and arrival city on the site. There, people with cars have listed their route and how many seats they have available AND how much they’d like to charge. Once you’ve found the right fit … you book. And within a couple hours you will get a response from the driver via Text (SMS) and you set the RdV times and places. You pay via credit card online (with the site taking a small percentage) and you’re good to go. This morning I actually paid my driver in cash … I believe it’s because he has over 100 positive reviews and this gives him the option to accept cash (this I am not sure about) but the site didn’t even give me the option to pay in advance. It worked out great though … just have exact change!

Downsides: this morning I was one of 5 people in a small car. I am not complaining. It cost me 14 euros and I got back to Marseille (a day late however, seeing as how I was SURE the strikes would be finished I didn’t reserve my Covoiturage until it was too late). Also, perhaps it’s not always easy to get to the RdV point … I took a bus to get me closer to the highway exit (la sortie de l’autoroute) so that it’d be easier for the driver to get back on the road to Marseille. City traffic in France is nuts, so avoid this if you can! Take the option to be picked up near an highway exit, if you can! Of course, a business or well lit area is best! Also, I guess I enjoy the Trains because you can work, watch movies, read, sleep … whatever you want. In a ride-share I feel obligated to be attentive … somewhat like couchsurfing, they are offering a service and in return you should be there to talk with them, or at least listen…if you’re able. But that’s my opinion, I could be wrong.

Now, why was I afraid before? Picture this: a college girl, speaking timid French (in the beginning) alone in a car with an old old forgot how-to-drive dude, randomly awkward dude, creepy dude, “not showered in weeks” dude … I dunno. That scared me. To be cornered in a situation where you really couldn’t get out. That could get awkward, quick!

Reality: there are generally many people in the car and if not, perhaps your driver has the music on. If you wanna talk, you can. If you don’t, it seemed okay by everyone else that I was quiet, so don’t talk. 2 hours isn’t too long in a car so it’s not the end of the world.

I am so thankful this exists and it is has a good reputation of NOT being sketchy here in France! The site lists feedback and comments from past riders and drivers so you really know who you’re going to ride with. You get the driver’s phone number and the make, model and color of his car.

As a precaution (just in case the strikes continue), I have already booked my trip to Antibes this weekend “en covoiturage” so that I am sure to leave and arrive when I plan. You really never know with Strikes in France!

Anyway, adding Covoiturage to my list of adventures last week made me feel pretty good. Along with welcoming CouchSurfers into my home I am well on my way to being quite the extrovert … ok. maybe not. But I am working on that whole “Live Adventerously” thing!

One thought on “Adventure all around”